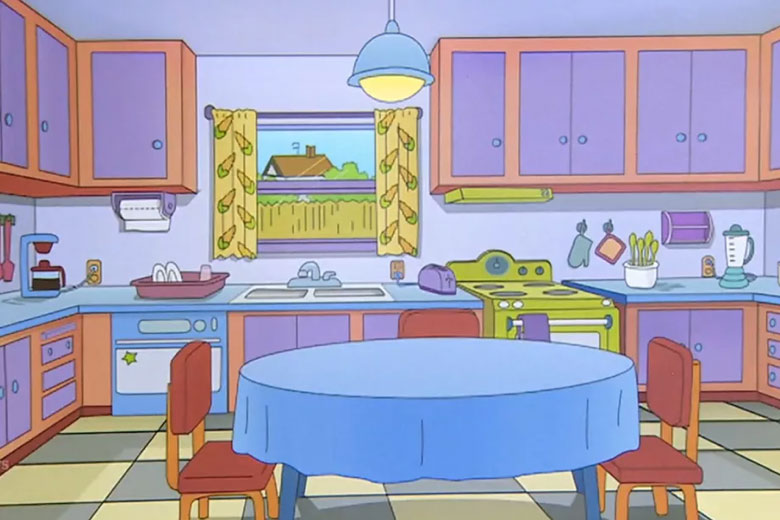 With the increased amount of TV we have likely all been watching, we thought this week we would explore some features of some of TV’s most famous kitchens! Each of these kitchens has some unique features, from the eat-in kitchen of the Simpson’s, to the apartment kitchen in Seinfeld, inspiration can be found anywhere.

The Simpson’s kitchen has been around since 1989 and I don’t think it has changed.  Something we rarely find in today’s kitchen is instead of an island with seating, which is the more modern way, it’s just a kitchen table. Which works for both a family gathering space and extra space for prep.  With the amount of stuff on their counters, they need all the extra prep room.

When you have a crew of staff to cook and clean for you, you better have a big functional kitchen.  The space around the island is big enough for people to work and move by. Tile behind the oven, for easy cleaning.  Kitchen supplies are out and ready to be used in an instant.  A new staff member was probably never told that a particular item is down in the second door, 3rd shelf, behind the instapot.  Our guess would be “open your eyes” was said more to someone who was looking for something particular.  Even though this is in the basement light was still an important part to not make this space feel like a dungeon.

Jerry Seinfeld seems to have a lot of cereal boxes.  Pretty simple kitchen for a bachelor pad and ahead of the times with grey.  Everything is easy to reach and the work spaces all flow, from the sink to the stove to the fridge, one would just have to take a step and turn.  Glass fronts to see what you have, maybe what you need to go and get.  The one thing that really stands out as something that in today’s designs that needs some improving is the corner space.  Maybe a new blind corner cabinet for both the upper and the lower so you can gain some functional storage.

We find it fascinating to consider that every tv show likely had a kitchen designer to match the look and feel for the show. They have to make it both feel real and design it so that a film crew can do what they need to do, which would add a ton of unique challenges.  What are some of your favorite TV kitchens?